The other day I was browsing the aisles of the local Stop n Shop and was seized by a sudden fit of inspiration. I don’t know exactly when or how it happened, but all of a sudden I knew that I wanted something Thai.

Through my inspired foggy daze I picked up a can of coconut milk and a jar of lemongrass. I typed these ingredients into Google and, after a few minutes of browsing, settled on this recipe, a tempting and well-reviewed eggplant curry. Little did I know that this was only the beginning of the road to delicious. The road was longer than I thought it would be, but at the end of it was the perfect balance of rich, creamy, yellow Thai curry and aubergine insistence – along with just the right amount of chili kick and a dash of fresh cilantro to cut through it all. 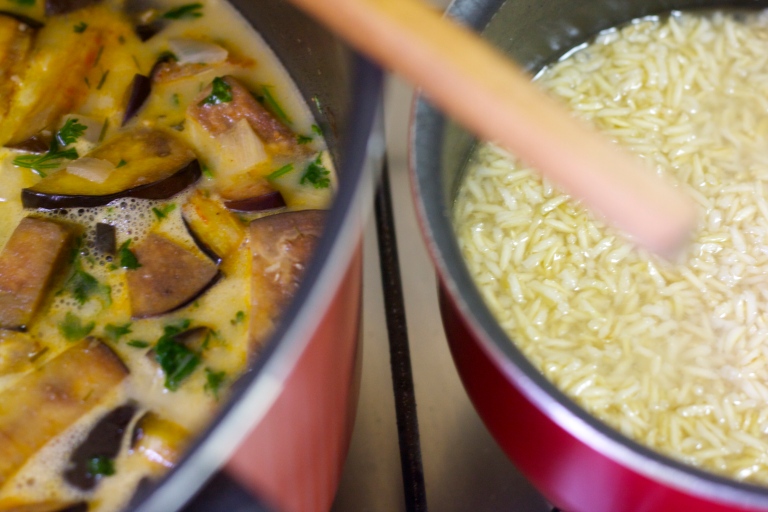 3 medium sized eggplants, cut into not-quite-bite-sized pieces (think about a bite-sized piece, then double it)
1 large yellow onion, chopped finely
Olive oil
1 tablespoon sugar
1/2 teaspoon Thai fish sauce (if you want a strictly vegetarian dish, you can leave this out)
1 can of coconut milk
1 bunch cilantro, divided into 2
Salt to taste, plus a tablespoon each of turmeric and cayenne or other hot pepper or chili powder

The first thing you’ll do is make a chili paste by blending together the garlic, lemongrass, ginger, and hot chili peppers (in a food processor works, or using a mortar and pestle, if you don’t have one handy). It is very important to do this first because it smells so incredibly amazingly good and will help boost your confidence.

Next, heat olive oil in a pan and brown your eggplant pieces (this really has to be done in batches unless you are working with an especially enormous wok or pot). This is my first significant departure from the linked recipe, which calls for rather large eggplant pieces. I found it much easier to cook the eggplant evenly and to my texture/taste satisfaction when they were in small pieces.

The next significant departure is that the original recipe said to rub turmeric and hot pepper into the eggplants before browning them; I did this afterwards because sometimes I cannot read directions. When, exactly, you spice your eggplants is entirely up to you, but the important thing is that you spice them.

Set the browned eggplant pieces aside and cook the chopped onion in some oil in the same pan; after a few minutes, add the chili paste (and brace for the smell, because it might knock you over) and, at last, throw in the eggplant, the fish sauce, the sugar, half the cilantro, and the coconut milk.

The original recipe also called for 400 mL (roughly 3/4 cup) of vegetable broth. I found this produced a thinner sauce than I wanted with my meal, so when I make the recipe I say just add enough broth or water to cover most of the eggplant pieces (if you wind up with too much sauce and it’s not reducing, you can always remove the eggplant, let the sauce reduce to its desired consistency, and then replace the eggplant at the end).

Bring to a boil and then reduce the heat, allowing to simmer, uncovered until the eggplant is cooked to your desired consistency (it should not be tough – you should be able to cut it with a fork – but it should still taste like eggplant). The original recipe says this will take 15 minutes; depending on the size of the eggplant pieces I use, I find 30-45 minutes is closer to what it takes. When your eggplant is getting close to done you may want to add some salt to taste, if necessary – but wait till the end to add that salt, lest the whole thing reduce itself to a saltier-than-desired results. Personally I usually end up adding 2-3 teaspoons of salt, depending on the strength of my fish sauce.

Serve with fresh cilantro over fresh rice. Save some for leftovers, because those are incredibly tasty too…

(Note: this recipe was expanded and updated in June 2014)