“But this was a problem with a known solution: it had happened before. To fix it, she explained with the authority of experience, we would need a bawwab, a ladder, and a balcony.”

I’ve been thinking a lot lately about the stories we expats tell about our lives in Arab cities. We’ve all got our narratives and our tropes and our refrains: Amman is boring. Amman is not boring. Beirut is so fun. You never visited Damascus? Marrakesh is a headache. You only just moved to Cairo? I hate Tangier. I love Tangier. 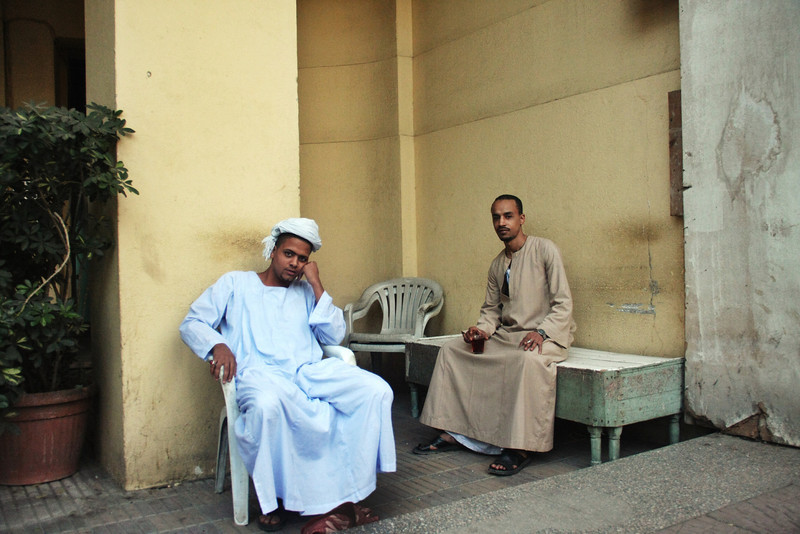 As women in particular, these narratives often expand into the realms of men, public space, and men in public space. The dominant narratives in those realms tend towards stories about sexual harassment, sexual violence, catcalls, and with good reason: we’ve all been through it, laughed, cried, vented, shut up about it, and then talked about it again.

But lately, what I’ve been thinking about more are the exceptions lingering at the margins of our grand Arab city expat narratives: the basic facts that frame our lives but never get woven into stories. And so I’ve been working on some new stories that explore those margins: spaces that can’t be categorized; interactions with strange men that defy expectations. The one I’m currently workshopping centers on the balcony, that not-quite-private and not-quite-public space, and the figure of the Egyptian bawwab. It’s not quite ready to share, but in the meantime I thought I’d post some excerpts, plus some photographs of local bawwabs I’ve been hanging out with lately by way of background research…

After chatting with a few bawwabs who were clearly suspicious of my questions and my camera (understandably so) I ran across these guys, who were more than happy to have their picture taken in front of the building where they work (but only if I let them fetch a turban, so that the picture would like more authentic, they said, and some tea so that I could sit comfortably with them. It was great tea, which is not always easy to find).

“The Egyptian bawwab is not so much a doorman as he is like a doorman. The word is difficult to translate because the social role the bawwab occupies in the urban Egyptian landscape can hardly be captured in a word. In an American city, doorman calls to mind a person whose job and uniform are designed to blend into the background of a building of a certain type. But the Egyptian bawwab doesn’t blend in – and he’s not supposed to. When not running errands for building residents, he can be found on a plastic chair or a wooden bench on the sidewalk. He knows who comes and who goes; he fixes the light fixtures (or knows someone who will); he guards the door and the social order of the building. Many bawwabs in Cairo are originally from Upper Egypt, where work is scarce. They typically live in a modest apartment on the ground floor of a building with their families…”

We talked about American politics & public opinion, about Bush vs. Obama, about what it’s like to man the doors of Zamalek. I remarked that most of the bawwabs I’d run across in Cairo seemed to be from Upper Egypt, and they said that yes, of course, there are so few jobs there, and so many buildings here. I asked where they were from. They said Aswan and asked if I had been. Not yet, I admitted, but soon, I hoped. Their eyes lit up the way mine do when I talk about the Blue Ridge Parkway. You must go, they said; there’s hadara (civilization) there.

I wasn’t sure if they meant because of the ruins of ancient Egyptian civilization that Upper Egypt is so famous for, or if they were suggesting something else. But rather than clarify I took another sip of tea and a few more photographs and filed away the question for another conversation on another day.

One thought on “cairo: men in public, public space”