It’s an exciting day: I finally sat down with the newly translated Scents and Flavors: A Syrian Cookbook, published last month by the Library of Arabic Literature. Produced during a golden age of Arabic cookbooks, its recipes offer a sense of what the highly aromatic and perfumed banquets of Syria’s 13th century Ayyubid elite would have tasted and smelled like. I picked a chicken dish featuring caraway, mint, and garlic.

When these recipes were compiled, Arab cuisine still showed clear traces of Persian courtly culinary culture. Although there are a handful of recipes in this volume that hint at Maghrebi, European, and Turkish influences, the book represents a singular stage in Syrian food history (consider too that it was penned prior to the introduction of tomatoes, potatoes, peppers, and other American foods to Europe and the wider Mediterranean). It’s no surprise that the smells that filled up my home as I was cooking the chicken recipe I picked out were different from anything I’d experienced cooking Arab food before.

The books in this series, by the way, are marvelous, if you don’t know them: the hardback editions feature side by side Arabic and English texts which is such a luxury (the typeface is rather gorgeous too, which is also nice). And they’re always edited, translated, and reviewed by the top scholars on the respective topic: in this case, the translation is by Charles Perry, who has extensive experience not only working with texts like these but cooking from them; the text was reviewed by David Waines, another leading culinary historian of the premodern Middle East.

Many of the book’s recipes are quite elaborate, but don’t let that discourage you: many, including those already documented and demonstrated on the LAL blog (see here, here, here, and here) and this delicious chicken with caraway, mint, and garlic, are very doable for the non-expert chef.

The medieval recipe, less an instructional guide than an aide memoire for professional chefs, reads as follows:

“Take a chicken and roast until done. When done, put wine vinegar, enough pounded caraway, mint, and pounded garlic on it, and bring to the boil two or three times. It comes out well.”

Many recipes include multiple steps for cooking meat and poultry; Perry explains that this is because in the thirteenth century, meat was tougher in general, in part because it would have been cooked the same day it was butchered. If I were making this recipe again, I might reverse the order: start by boiling and finish with roasting. This is how birds are often cooked in Morocco and Egypt. However, this time I followed the recipe as much as possible and began by roasting my bird in the oven after cleaning it with white vinegar and rubbing it with salt and olive oil. You can really roast your chicken however you like, though (this handy guide from the New York Times cooking section runs through many options). 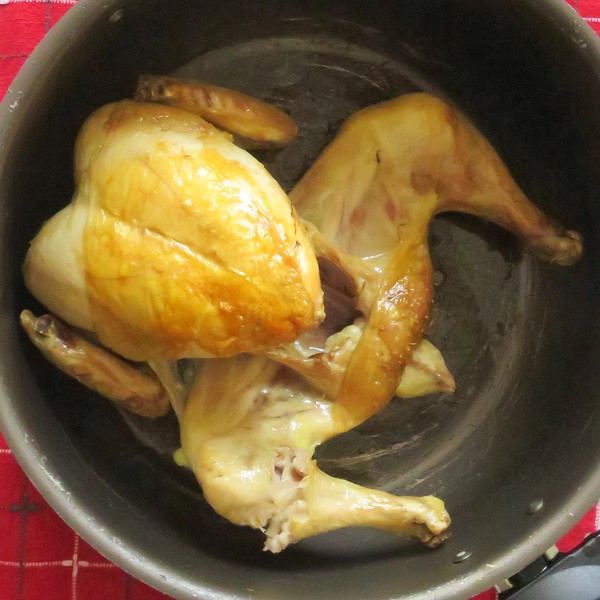 While the chicken roasted I sat down with the ingredients for the flavoring. First I peeled the garlic and crushed it through a garlic press, then I chopped up the mint. I decided to smash everything (mint, garlic, caraway) together in a small mortar and pestle in equal proportions. The result was wonderful: releasing the oils and aromas from all three ingredients as they blended together was delightful. I ended up with about a quarter cup of mixture.

Here’s where I deviated from the recipe: I reserved a teaspoon of the mixture to blend into some plain salted yogurt, because I was certain that the combination would go very well with yogurt and that it would be delicious with the chicken. This was indeed the case and I highly recommend serving the chicken with the flavored yogurt on the side. Or, the next time you’re making a garlicky and/or minty yogurt dip or sauce, toss in some crushed caraway too, because it’s divine.

If you aren’t familiar with caraway, it can be, as Gernot Katzer describes on his wonderful Spice Pages, a controversial spice. I found that crushing it with mint and garlic did much to lessen the intensity of the caraway, but it does have a very distinct warm, earthy, even pungent flavor that tends in the general direction of fennel or anise. If you’re worried about how it might be received, you can always leave the caraway out of the cooking process and simply include it in a yogurt sauce, served on the side. But if you want to fill your home with a new alchemical aroma it’s never experienced before, then I recommend plenty of caraway all the way.

Next, the recipe calls for the roasted chicken to be covered with the vinegar and seasonings and boiled two or three times.

I placed my chicken in a pot, poured all the pan drippings on top, added the vinegar and seasonings, and then poured in enough water to cover about half the chicken. I wanted to cook it long enough for the chicken to absorb its flavors, but not so long that it lost its roasted crispiness or good looks or texture. I opted to simmer the chicken, half-submerged, for 10 minutes on each side. In other words, bring to a boil, lower to simmer, and let sit for 10 minutes, then flip the chicken over, add water as needed, and keep simmering for 10 more minutes. This made my house smell incredible and also seasoned the chicken well.

As I said, the next time I make this recipe I might try boiling the chicken in the seasoned broth first and then finishing it in the oven. Another option might be to simply roast the chicken after applying the mint/caraway/garlic mixture as a dry rub, or to marinade the chicken ahead of time with the mixture and a healthy amount of red wine vinegar. There are a dozen possibilities, but the key is the combination of those three aromatic seasonings. 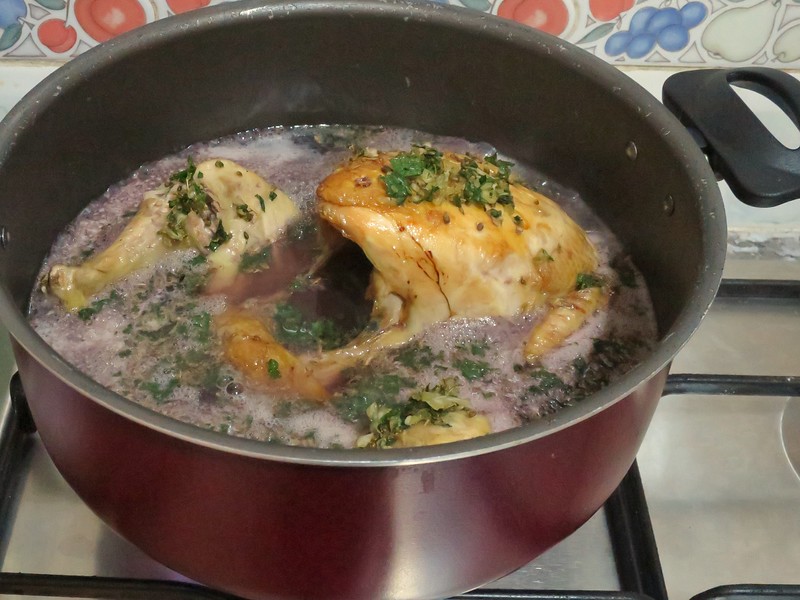 This time around I simply lifted the chicken out after the second “boiling” and carved the pieces off the bones. I served them as small sandwiches with a dollop of the yogurt sauce I mentioned above. Not wanting the flavors to go to waste, I also made a broth from the chicken carcass and some vegetable scraps to use in future soups and risottos and other dishes. However you mix it up, the combination of seasonings in this recipe makes the cookbook’s title live up to its name.

One thought on “Syrian scents and flavors: chicken with caraway, mint, & garlic”