The latest edition of Rawi, Egypt’s glossy, impeccably designed heritage review, just came out––and it was all about food. It features articles about everything you’ve ever wanted to know about Egyptian food, from a rare glimpse into the cuisine of rural Egypt to a deep dive into millennia of Egyptian bread history. My own contribution, naturally, was about Abla (“Auntie”) Nazira, aka Nazira Niqula, Egypt’s most famous modern cookbook author (you may recall how I worked through her duck recipe one Thanksgiving a few years ago).

Thanks to the magazine’s incredible design team the article looks beautiful, and it’s a particular privilege to have my work translated into Arabic (the magazine is bilingual). I’m especially grateful to the editors, Yasmine El Dorghamy and Mennat-Allah El Dorry, for tracking down a family photo of Nazira Niqula out to lunch with friends, which appears next to the text.

The issue also includes a recipe for macarona bechamel, the classic Egyptian comfort-food casserole, which I translated from the famous cookbook Abla Nazira co-wrote with Bahiya ʿUthman. You’ll have to track down your own copy of Rawi for that recipe, but when I was testing and translating it last year, I also tried my hand at another iconic Egyptian dish: lentil soup, or shorbat ʿadas. So in honor of the issue’s release, I thought I’d publish my spin on Abla Nazira’s Egyptian lentil soup here. 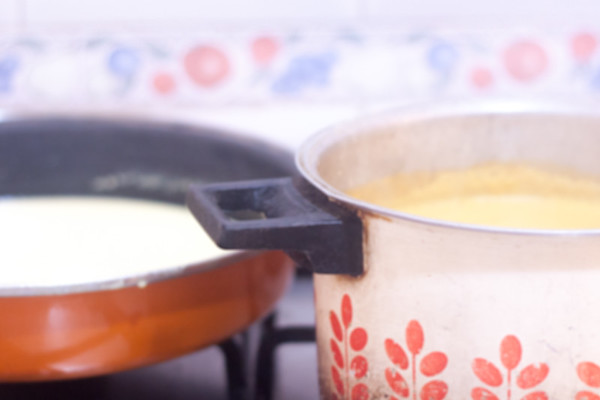 When I was doing “kitchen histories” in Egypt, one of the questions I always asked was about recipes made in different seasons of the year. One of the first responses was always some version of this lentil soup, explained to me as a dish that warms you up and gives you the kind of energy you need in the cold season (and yes, Egypt does get cold!).

Lentils were also cited as a popular comfort food. One family I met explained that according to a local superstition, if a person doesn’t satisfy their cravings during pregnancy, their child will bear a birthmark in the shape of that food. “But of course that’s just something people say,” they reassured me, not something to take to heart. A few minutes later, however, they mentioned a cousin who had been born with a lentil-shaped beauty mark. I showed the family the small birthmark on my own ankle and the mother decided that it was shaped like a piece of chicken.

Niqula & ʿUthman’s recipe is almost startlingly spare for such a beloved dish, but I suspect they knew that many of their readers would already have some version of the recipe in mind, inherited from a mother or grandmother or aunt. So I’ve treated their recipe more like the aide-memoire instructions of earlier Arabic cookbooks and expanded it with the advice of an expert, the dynamic subject of one of my richest oral history interviews who also happens to be a spectacular home cook. I’ve anonymized the interviewees from my academic research, so when I write about this particular individual, I call her Hanan.

When I asked Hanan how to make lentil soup for winter, she said that beyond the basic lentils + onion combination, one could add tomato, garlic, and or parsley, depending on personal preference. But she strongly advised the addition of carrots. It makes for akla gamila, she explained, using an adjective implying something at once nutritious, tasty to eat, and beautiful to look at.

In addition to the inclusion of the carrot and Hanan’s direction to puree the soup to a smooth consistency in a blender, I’ve also swapped regular for clarified butter and adapted the measurements for contemporary American usage. I’ve kept Niqula & ʿUthman’s specification that a red onion be used. The lime wedges to serve are my own suggestion, although they would not be out of place at an Egyptian table.

Immediately following this recipe is another for foreign or European (“afranji”) style lentil soup. That recipe is far more elaborate, with potatoes and other vegetables as well as milk. It would be an easy conclusion to jump to that the division of lentil soups, and many other recipes in the cookbook, into categories of “baladi” (local/Egyptian) and “afranji” (foreign/European) is evidence of the existence of discrete Egyptian and local cultures sitting side-by-side in late colonial Egypt. But of course this is a fiction. Consider, for example, the inclusion of croutons made from French-style bread as a garnish for a classic Egyptian soup. 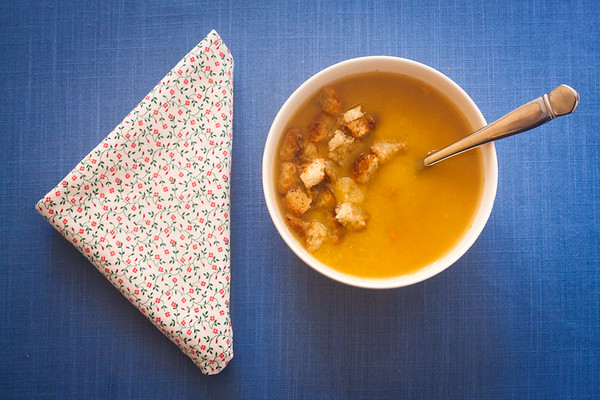 This is partly a reflection of the fact that Western styles of bread were a mark of social status in twentieth-century Egypt, particularly among Niqula & ʿUthman’s social milieu. But it’s also a reminder that food cultures are always hybrid, always evolving and borrowing and adapting. Acknowledging that doesn’t mean we lose sight of histories and roots and origins; but it helps us to take the long view––and hopefully a more expansive view, with room for variation and diversity, rather than purity––in the way we categorize and describe and label the food we eat.