I’m temporarily based in the seaside town of Asilah, Morocco. Not far from here, the Mediterranean gives way to the Atlantic, and you can see Europe from the northwest corner of Africa. It’s a place I’ve come to during times of transition in my own life (after living in Morocco for over two years, this was the last place I spent the night before leaving in 2009), so it’s the perfect place for me to come and reflect as I get ready for yet another move (after two years spent in Beirut, Amman, and Cairo, I’ll be headed back stateside in August).

So of course, I’ve returned to an old recipe and a favorite dish: ratatouille, a classic Provençal eggplant stew. I’m always partial to the more rustic edges of cuisines (I’ve seen ratatouille referred to as “peasant” cuisine), and so it’s one of my favorite French concoctions. Of course, like so many Mediterranean dishes, there are Spanish, Italian, Greek, Algerian, and Turkish versions, too.

With eggplant so plentiful in Morocco, I’d frequently try my hand at it back during my days living in the Souss. But while my eggplant stews were always tasty enough, there was always something missing. So, five years later and maybe just a little bit wiser, I decided to tackle it again and see what happened. The result was an almost-sweet, olive-oil-simmered, harmonious gustatory chorus of vegetables.

Loosely based on The Kitchn’s One-Pot Ratatouille

The last bit is the real departure from any classic ratatouille recipe: I firmly believe that the addition of fresh herbs to the dish is more important than the addition of any particular fresh herb; this way, you can adapt your recipe to any location and season. The classic recipe usually calls for fresh thyme and basil and a dried bay leaf. I used a hint of dried mint, plus fresh cilantro and parsley, and it was delightful. 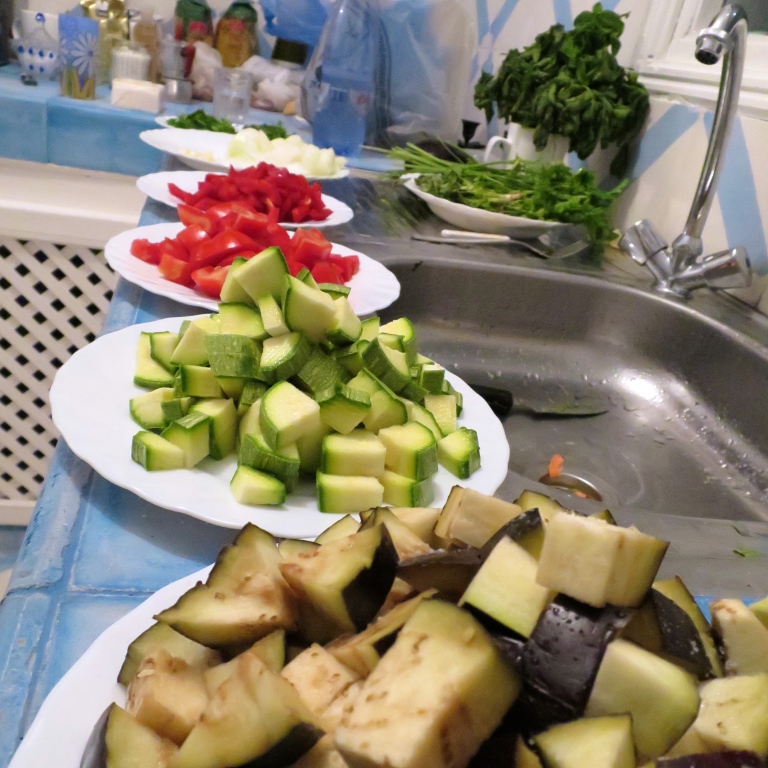 Start by chopping your garlic and herbs finely and your other vegetables into small pieces, let’s say no more than an inch cubed. Chop your eggplant first and set it aside in a bowl, tossed with a generous amount of salt.

The linked recipe above is a one-pot recipe, but I like to use two to speed along the process a bit.

Start by sauteeing your onions in olive oil in one pot. When they start to turn translucent, add in the peppers and a pinch of salt. In the pot next door, cook the zucchini olive oil and salt as well. Everything should be cooking on low to medium low.

Once the zucchini has begun to soften and cook through, add it to the onions and peppers; mix these all together very well and turn on very low heat.

At last, toss the eggplant into the zucchini’s old pot and cook with plenty of olive oil for 10-15 minutes; then add this to the onion & pepper pot as well.

Adding a touch more olive oil, add the garlic to the pot where the eggplant was and after a minute or two, add the tomatoes and herbs. The tomatoes should have enough liquid to allow you to scrape up any brown bits that have formed on the bottom of the pot while the zucchini and eggplant were cooking (this is where all the delicious flavor is…).

Next, add the slowly sauteeing vegetables next door (keeping the onions and peppers stewing together on low throughout begins a caramelization process that will make your final stew to die for) back into the pot with the garlic and tomato.

Allow it to simmer, uncovered, on low, for about an hour. Towards the end, start adding salt – very carefully and just a bit at a time. The right amount will bring out the flavors amidst the sweetness of the vegetables, but too much will make you very very sad.

Scenes from Yorkshire: strong penguin window display game / picnic in the wood / views of the Dales / RHS Garden Harlow Carr / post-afternoon tea carnage
Latest from the blog: a recap of my interview with @anasatassi organized by @warscapes last December, with some snapshots of a handful of my favorite recipes, techniques, & serving suggestions from & inspired by Atassi’s wonderful cookbook Sumac: Recipes & Stories from Syria. A cookbook that embodies nafas as something that exists between the realm of written recipes and social worlds—something you can’t see but can certainly taste—and celebrates cuisine as the product of collective authorship, creativity, and care. Links to the post and the interview in bio.
Next up in #CookingWithTona🥕: a recipe so extremely loosely inspired by Molly O’Neill’s A Well-Seasoned Appetite that it became something else entirely, stemming mostly from the contents of my fridge. These included not enough leftover homemade tomato sauce to make pasta with, one piece of bacon, kale, an orange. Mixed in with some beans from the pantry…
Next up in #CookingWithTona🥕: a kale & sausage stew from Molly O’Neill’s A Well-Seasoned Appetite (1995). The genius element of this particular recipe that I’d never have come up with on my own: using balsamic vinegar to season the stew, which layered a totally different kind of acidity and flavor than my usual squeeze of lemon; perfect for a dark cozy winter day. Also pictured: the gorgeous fruit & vegetable themed floor mat my brilliant artist mother @lishnc created for my kitchen!
When my godmother Tona died two and a half years ago, she left me a staggering cookbook and recipe collection — which I’ve slowly been cataloging and thumbing through ever since. In 2022, I’m paying homage to Tona by cooking my way through her collection & sharing the results here using the hashtag #CookingWithTona🥕. If you are looking to use up some extra fennel or zhuzh up your risotto, read on!
A few images of recipes from a new book I helped edit, Making Levantine Cuisine, from @utexaspress: rice pudding (recipe from @antoniotahhan), a Gazan shrimp stew resplendent w/dill and hot peppers (recipe from @reem.kassis) which is incidentally on the menu tonight, and a carrot & tahini dip from Suzanne Zeidy (you may be familiar with it from eating at Cairo Kitchen! now you can make it at home).