This is a follow-up to a couple of posts: it revises an Egyptian duck recipe I posted several years ago and it’s the sequel to the classical Arabic duck recipe from last December. If that was a classical Arabic sort of duck, this is its vernacular counterpart. In my academic writing lately, I’ve been using both recipes to think through the differences between written recipes and the those handed down or shared in other ways.

More on that, and a recipe for a slightly tart, slightly sweet, entirely sumptuous roast duck, below.

This recipe is a composite of several different recipes, starting with this one that my roommate and I attempted in Cairo several years ago and updated over the course of many hours spent talking, cooking, and eating with some of Egypt’s best home cooks.

The recipe is also a microcosm of Egyptian food history. It’s seasoned with cardamom and mastika (both pictured above; mastika is also called mastic gum or gum Arabic), a combination that many Egyptian women I’ve met identify as characteristic of their grandmother’s cooking. The bird is cooked with citrus – which, according to Nawal Nasrallah, was a common practice in medieval Egypt. Nasrallah also notes that mastic has long been used in Egyptian cooking to offset the strong odors of meat and poultry, the same features that ʿUthman and Niqula were so concerned about countering with their 1941 duck recipe. This particular use of mastic is a uniquely Egyptian phenomenon in a region where the spice is typically used to flavor sweets and confections.

So there are many aspects of this recipe that draw on Egyptian cooking practices that have been around for centuries (if not more). But the twist – the part I didn’t quite appreciate until recently – is the addition of a thick, intensely stewed tomato sauce in the mix. This technique wouldn’t have been possible before the tomato was introduced to Egypt. That’s is tricky to pin down but my best guess is that it happened in the 18th or 19th century.

Once the tomato was introduced, it became and remains a cornerstone of modern Egyptian cooking. Egypt’s basic tomato-based sauce techniques are so commonplace, in fact, that they rarely appear in cookbooks and only became obvious to me through lots and lots of conversations with home cooks. In other words, for all its historical basis, there is also something about this recipe that can’t be accessed through text because it simply doesn’t exist there. In this sense, it’s a perfect foil to the overly fussy classical Arabic of that other duck recipe. 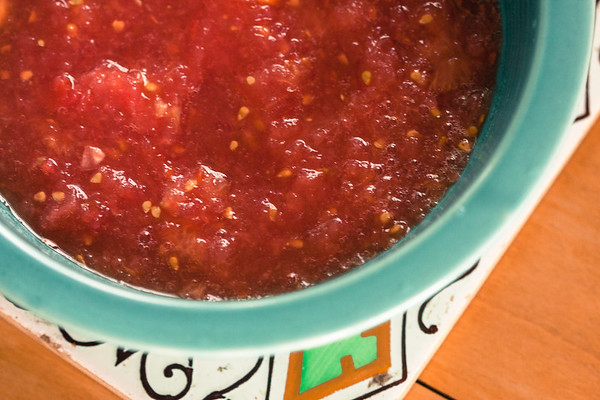 Duck No. 2 (vernacular)
Roasted Duck, or What does duck taste like in Egyptian?
Compiled and adapted from the advice of the many wonderful cooks who shared their culinary knowledge with me

Place the duck, cardamom, mastic, and onions in a large pot, cover with water and simmer gently for 45 minutes. Add water as needed, just enough to keep the duck immersed. 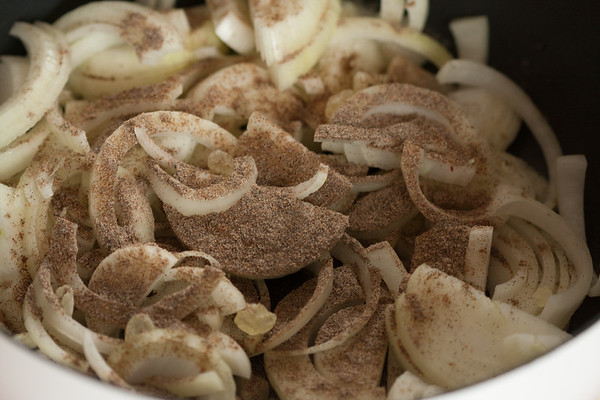 Meanwhile, make some “salsa” (a kind of tomato sauce, in this context). Combine the grated tomatoes, tomato paste, samna, honey, orange juice, and salt and pepper in a saucepan and mix well. Bring to a boil then lower heat to a simmer until it turns from something like this: 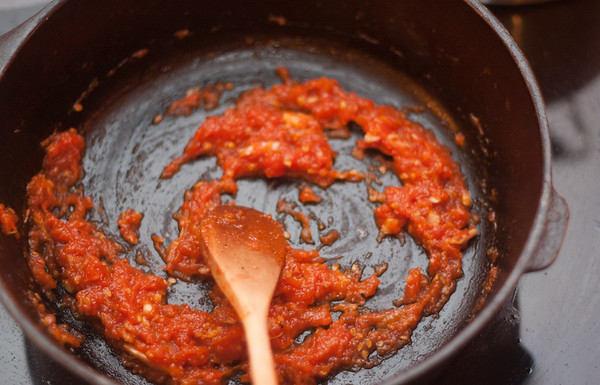 As it reduces, adjust the salt and pepper to taste.

Preheat your oven to 425 degrees Fahrenheit.

Once the duck is finished, carefully remove it and place it on a broiler pan, if you have one, or in any other kind of baking dish if you don’t.

Prick the bird in several places (this will let the fat and juices run out) and use a toothpick to pin the flap of flesh by the neck to the body of the bird, like so: 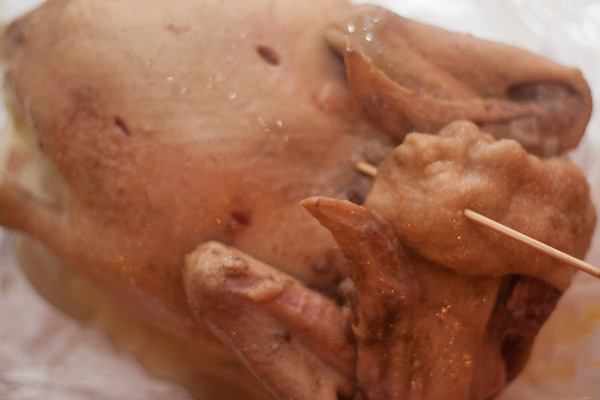 Next cover the bird as much as possible in the thick salsa (the orange and tomato marinade) and roast. After 15 minutes, baste in clarified butter and flip the bird over, applying additional marinade and clarified butter before cooking for an additional 15 minutes. Be sure to cook the bird to an internal temperature of 155 degrees F.

Since it was cooked partway in the pot, it shouldn’t need more than about thirty minutes in the oven. It should begin to brown all over. This is how mine looked, but I’ll admit I’ve seen ducks that were far more deeply browned, and next time I might try a little quick broiler action towards the end of the roasting process to see if I can achieve a similar effect. Regardless, this duck was quite tasty as is:

Let it rest, carve, and enjoy. You’ll end up with a duck that is succulent and just a little sweet; I suspect the thick tomato coating helps prevent the duck from drying out in addition to serving as a great butter and citrus delivery system.

And whatever you do, don’t throw away the broth that the duck was cooking in! I strain it to get rid of all the onions then freeze it to use as a base for future soups, stews, and risottos. Likewise, save those pan drippings and use them to season your cast iron cookware and add a little richness to your cooking.

So why the title of this post? I’ve been doing a lot of thinking lately about what cookbooks can and can’t do, and their limitations as a medium for transmitting culinary knowledge. There’s so much a cookbook can’t quite communicate about technique, judgement, flavoring and taste, when to stick to a tradition or pattern and when to innovate – all sorts of contingencies that are better communicated in person or in conversation, or learned through trial and error.

The first time I made this recipe I used a ready-made “salsa” in the form of tomato paste, woefully unaware of the range of approaches that Egyptian women use to concoct their own, fresher, better version. My appetite for the recipe was piqued by experiences eating duck in Egypt, from a family-owned restaurant in Luxor to the home of a friend. My understanding of the recipe is made up of dozens of phrases of advice offered to me by Egyptian home cooks: “boil with a lot of onion,” “season with cardamom and mastika,” or the way that the gamid (solid) that described the way a tomato sauce should look and feel corresponded with the sense of gamid as vigorous, robust, and solid the way that deep culinary knowledge ought to be.

Luxor: land of pigeon and duck

(Luxor: land of pigeon and duck)

I tried this recipe numerous times in attempts to reconcile all those experiences with my own practical culinary sense, adjusting the boiling time and embellishing the roasting technique with tips picked up from culinary authorities in my own culture, like Ina Garten.

This process is a remarkable contrast to the form of cookbooks written in mid-century Egypt. Those books were essentially an attempt to translate a particular ideology that dictated norms of rationalization, refinement, and nutrition, into recipes; and yet their practical function seems to have been much more along the lines of establishing forms of social distinction than preserving or transmitting culinary knowledge.

That’s not to say that all cookbooks work in the same way, of course. But it does draw attention to limitations that written recipes entail. In so many ways written recipes are like placeholders or signposts: the tip of the iceberg in terms of what it really takes to produce a meal. This is what I mean when I say that ideology never cooked a duck.

In Marxism and Literature, Raymond Williams wrote that “not only what is thought is being lived,” urging us to reconsider our received notions about knowledge and experience not by pitting “feeling against thought” but rather considering “thought as felt and feeling as thought.” What happens when we look beyond cookbooks to consider cooking in terms not only of culinary knowledge, but also culinary feeling: affective ties of hospitality and friendship, sensory memories, gestures witnessed and learned and re-learned?

Once we do accept the need to reconsider culinary practices in this way, it becomes even clearer what risks we run if we don’t: which histories and voices are neglected? What forms of labor, already likely un- or under-remunerated, are further undervalued? Food is a potent sphere for reclaiming space and thinking against dominant narratives, but that doesn’t mean it always works that way. For every duck recipe printed in a cookbook, surely there are thousands of ducks like these, simmering away in kitchens and off the page. As scholars, conscientious cooks, or simply people who care about food and its liberatory potential, it’s up to us to seek them out and celebrate them.