It has been such a summer. I spent seven weeks in Egypt, a week in the UK, and a week at the beach with family with a quick stop in New York City somewhere in there. There is so much to write about, and I’m finally getting to my backlog of blog topics. I’m starting from the most recent meal I cooked and working my way back, so in the coming weeks, expect to read about food and drink in Port Said, the history of koshari and Abla Nazira’s famous Egyptian cookbook, more pied noir recipes from Morocco, the best Italian food in Egypt, and more.

But for now, here are two dishes perfect for throwing together a summer dinner: a brisk, crisp raw zucchini salad (h/t my dear friend and Cordon Bleu graduate Juliet) and a luscious summer grain bowl (h/t the inimitable Maggie Fick, lately of Cairo, now the FT West Africa correspondent). Both dishes are vegetarian, which I’m always partial to in the summer heat, but will leave you full and happy. 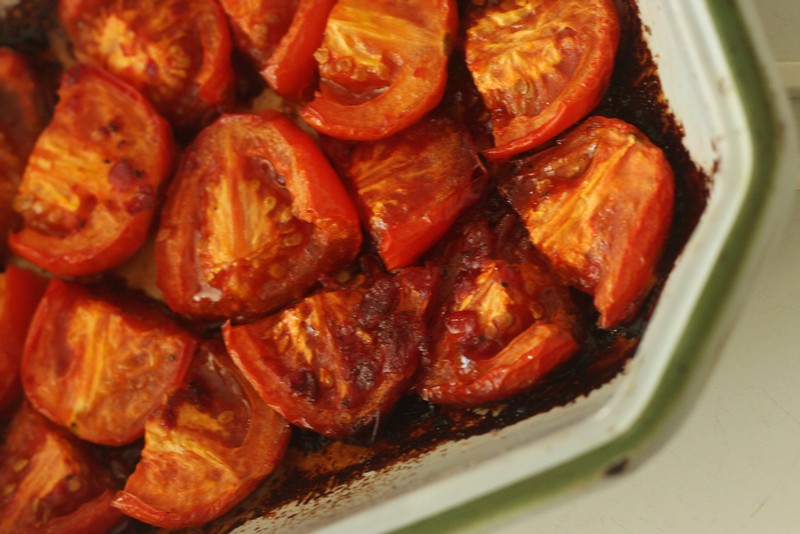 For the salad, per serving/person

For the grain bowl (makes four moderate servings; I halved the amounts from the original recipe, but you can prepare all the components in advance, store them separately, and just mix them as needed, if you want to make in larger quantities):

A cup or so of labneh or Greek yogurt

The zucchini salad is quite easy. You just toss all those ingredients together, adjust for salt and lemon juice, and let it sit a while before serving.

I like to toss my salads in a much larger bowl to give the ingredients lots of room to get evenly coated: 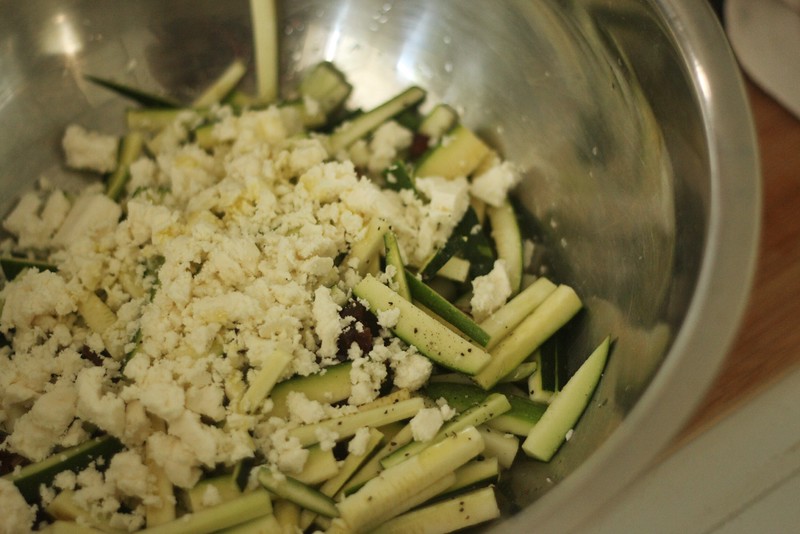 And then serve in a smaller bowl. This technique is especially useful for this particular recipe, because it’s so important that the feta really gets distributed everywhere.

The directions for the grain bowl might seem involved and complicated, but each component is fairly straightforward. First, preheat your oven to 350 degrees F. Slice your tomatoes into quarters and place them in a heavy (and deep) baking dish. Toss the harissa/hot sauce, some olive oil, balsamic, and salt and pepper, and toss the tomatoes in this mixture, leaving them all face-up. 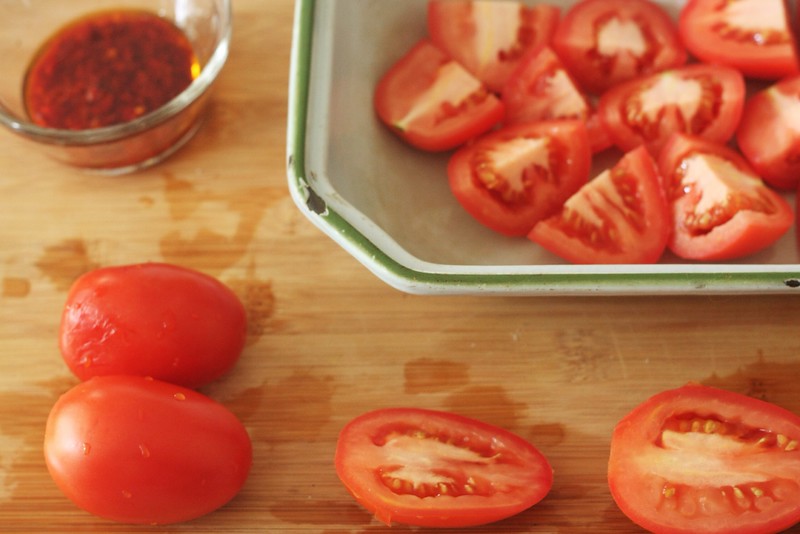 Next, shower those tomatoes with a goodly amount of brown sugar. Yessssssssss.

And bake them for about 45 minutes (more or less, depending on the size of your tomatoes and the oven).

While that’s happening, caramelize the onions. Start by cooking them in butter and olive oil on medium low heat; once they start to turn translucent, add the spices and brown sugar and turn to low heat. Stir occasionally for 45 minutes. Finish them with a squeeze of lemon. It actually adds a nice bit of texture to the dish if some of the onions are a bit crispy, so let your caramelizing hair down and don’t worry about manning the pan or keeping the heat as low as much as you might normally.

For the pilaf, first prepare your spinach: wash the leaves off and then wilt them in a covered pot using just the water they were rinsed in. This just takes a few minutes. Set the spinach aside and saute the chopped onion and garlic in olive oil (you can add spices of your choice – I used ginger, cumin, and ras al hanout the last time I made this). Throw in the grains and let them get coated in the oil, stirring for about a minute, before adding water (or broth, if you wish) and cooking according to the instructions.

If you want to kill two birds with one stone, you can use some leftover wine (or beer, or water) to deglaze the pans you roasted the tomatoes and caramelized the onions in. They’ve probably got stuff on them at this point. And once they’re deglazed, use the resulting liquid to cook the grain. Yum!

Once the grain is cooked, throw in the spinach, mix it up, and adjust for salt and pepper to taste.

Serve either in a big dish or plate individually: first spoon in the grains/pilaf, then add tomatoes, dollops of lebneh, and onions. You can also sprinkle in chopped fresh herbs (the original recipe calls for mint, but I’ve used basil, which is also nice) but it’s not necessary.

If you have a friend bring over a bottle of rosé and some gazpacho, then you’re really in business.

Wondering what you might do with those gorgeous sour cherries at the farmer’s market? Pit them, juice them, & use them in cocktails in lieu of lemon juice or sour mix. Pictured here: a sidecar with 1.5 oz cognac, 1 oz Cointreau, 3/4 oz sour cherry juice. Shake over ice & strain. Extra thanks to @antoniotahhan for inspiring me to juice delicious sour things today!
Scenes from Yorkshire: strong penguin window display game / picnic in the wood / views of the Dales / RHS Garden Harlow Carr / post-afternoon tea carnage
Latest from the blog: a recap of my interview with @anasatassi organized by @warscapes last December, with some snapshots of a handful of my favorite recipes, techniques, & serving suggestions from & inspired by Atassi’s wonderful cookbook Sumac: Recipes & Stories from Syria. A cookbook that embodies nafas as something that exists between the realm of written recipes and social worlds—something you can’t see but can certainly taste—and celebrates cuisine as the product of collective authorship, creativity, and care. Links to the post and the interview in bio.
Next up in #CookingWithTona🥕: a recipe so extremely loosely inspired by Molly O’Neill’s A Well-Seasoned Appetite that it became something else entirely, stemming mostly from the contents of my fridge. These included not enough leftover homemade tomato sauce to make pasta with, one piece of bacon, kale, an orange. Mixed in with some beans from the pantry…
Next up in #CookingWithTona🥕: a kale & sausage stew from Molly O’Neill’s A Well-Seasoned Appetite (1995). The genius element of this particular recipe that I’d never have come up with on my own: using balsamic vinegar to season the stew, which layered a totally different kind of acidity and flavor than my usual squeeze of lemon; perfect for a dark cozy winter day. Also pictured: the gorgeous fruit & vegetable themed floor mat my brilliant artist mother @lishnc created for my kitchen!
When my godmother Tona died two and a half years ago, she left me a staggering cookbook and recipe collection — which I’ve slowly been cataloging and thumbing through ever since. In 2022, I’m paying homage to Tona by cooking my way through her collection & sharing the results here using the hashtag #CookingWithTona🥕. If you are looking to use up some extra fennel or zhuzh up your risotto, read on!